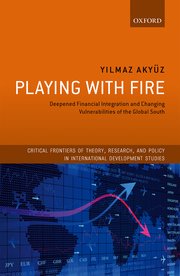 Starting in the early 1990s many emerging and developing economies (EDEs) liberalized their capital accounts, allowing greater freedom for international lenders and investors to enter their markets as well as for their residents to borrow and invest in international financial markets. Despite recurrent crises, liberalization has continued and in fact accelerated in the new millennium. Integration has been greatly facilitated by progressively looser monetary policy in the United States, notably the policies that culminated in debt crises in the United States and Europe and the ultra-easy monetary policy adopted in response. Not only have their traditional cross-border linkages been deepened and external balance sheets expanded rapidly, but also foreign presence in their domestic financial markets and the presence of their nationals in foreign markets have reached unprecedented levels. As a result new channels have emerged for the transmission of financial shocks from global boom-bust cycles. Almost all EDEs are now vulnerable irrespective of their balance-of-payments, external debt, net foreign assets and international reserve positions although these play an important role in the way such shocks could impinge on them. This is a matter for concern since the multilateral system still lacks mechanisms for orderly resolution of financial crises with international dimensions.  Playing with Fire provides an empirical account of deeper integration of EDEs into the global financial system and discusses its implications for stability and growth, focusing on the role of policies in the new millennium in both EDEs and the United States and Europe.