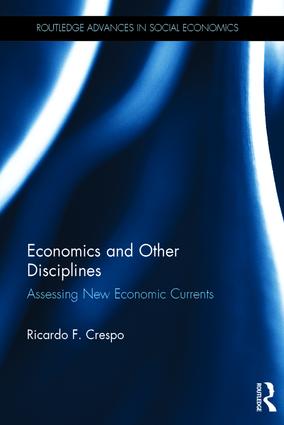 By Ricardo F. Crespo. From Routledge:

During the second half of the twentieth century, economics exported its logic – utility maximization – to the analysis of several human activities or realities: a tendency that has been called “economic imperialism”. This book explores the concept termed by John Davis as “reverse imperialism”, whereby economics has been seen in recent years to have taken in elements from other disciplines.

Economics and Other Disciplines sheds light on the current state and possible future development of economics by focusing on it from a philosophical perspective, broadening the concept of rationality in economic theory. The beliefs that prevail in the world today make up a physicalist worldview. This book argues that this pervasive view is harmful for economics as a social science. Do new economic currents like behavioral economics, evolutionary economics, neuroeconomics, institutional economics, happiness economics, the capability approach and civil economy, escape this widespread mentality? What would be an adequate underlying economic ethos? Do these approaches fit into this ethos?

Ricardo F. Crespo appraises the contributions from a classical philosophy angle, emphasizing their implications regarding practical reason. This volume is of great importance to those who are interested in political economy, economic theory and philosophy, as well as philosophy of social science.