New Book: Why Don’t the Poor Rise Up? – Organizing the Twenty-First Century Resistance 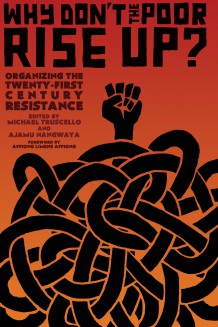 Even mainstream media like the New York Times and The Economist have recently posed the question: Why don’t the poor rise up?, uneasily amazed that capitalism hasn’t met with greater resistance. In the context of unparalleled global wealth disparity, ecological catastrophe, and myriad forms of structural oppression, this vibrant collection offers a reassessment of contemporary obstacles to mass mobilization, as well as examples from around the world of poor people overcoming those obstacles in inspiring and instructive new ways. With contributions from Idle No More organizer Alex Wilson, noted Italian autonomist Franco “Bifo” Berardi, Cooperation Jackson organizer Kali Akuno, Cape Town-based anarchists Aragorn Eloff and Anna Selmeczi, and sixteen other scholars and activists from around the world, including a Foreword by Affiong Limene Affiong, Nigerian co-founder of Moyo wa Taifa, a Pan-Afrikan Women’s Solidarity Network, Why Don’t the Poor Rise Up? presents a truly global range of perspectives that explore the question of revolution, its objective and subjective prerequisites, and its increasing likelihood in our time.