Invitation to Endorse and Join the Campus Antifascist Network 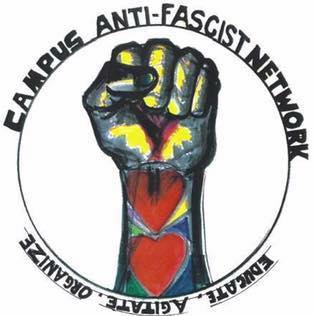 The election of Donald Trump has emboldened fascist and white nationalist groups nationwide, on campus and off, and their recent upsurge requires antifascists to take up the call to action once again. Since Trump’s election, fascists, neo-fascists, and their allies have used blatantly Islamophobic, anti-semitic, racist, anti-indigenous misogynistic, homophobic, transphobic, and ableist messaging and iconography to recruit to their ranks and intimidate students, faculty and staff. As we wrote this letter, hundreds of torch-bearing white supremacists were marching on the campus of University of Virginia chanting “Jews will not replace us” and other vile slurs.  An antifascist activist was murdered by these same forces in Charlottesville, raising the stakes of resistance to new heights.

Fascists have used “free speech” as a façade for attacking faculty who have stood in solidarity with students against the threat that these organizations and individuals pose, and as an excuse to march and organize around slogans drawn directly from “blood and soil” rhetoric of Nazi Germany. White supremacists like Richard Spencer have invoked classic tropes of white supremacy to scapegoat and target immigrants, non-whites and the foreign-born. Such organizations and individuals have also engaged in outright physical violence up to and including murder, like those tragic incidents that occurred in Oregon, Virginia, and Maryland.

The so-called “alt.right” and their fellow travelers have also aggressively sought to smear, bully and intimidate faculty, especially faculty of color.  Progressive scholars such as Keeanga Yamahtta-Taylor, Johnny Williams, Dana Cloud and George Ciccariello-Maher, among others, have each been threatened with violence, or firing, for strong anti-racist social justice commitments.

The time to take action is now. We call on all interested individuals and organizations to support or join the Campus Antifascist Network (CAN).  CAN will help you organize a local antifascist chapter on your campus that can help support, educate and defend faculty, students and staff,  and share information on fascist organizing in the U.S., planned fascist activities, and organized antifascist responses.  CAN has already expressed its solidarity with the Charlottesville protests: https://docs.google.com/document/d/1E-JyaGwG4HLgJixeYxflInlw_Z6eLuNH6TfobzM4ZnA/edit?ts=5990393a

CAN has also devised a public, open access Syllabus on Fascism that may be used for any educational purpose: https://drive.google.com/file/d/0B6FX_x2dbvXqblpZQ3JuUTYxTnM/view?usp=sharing

To become a member of the Campus Antifascist Network,  or to endorse, please write to cannetwork.fighttheh8@gmail.com.