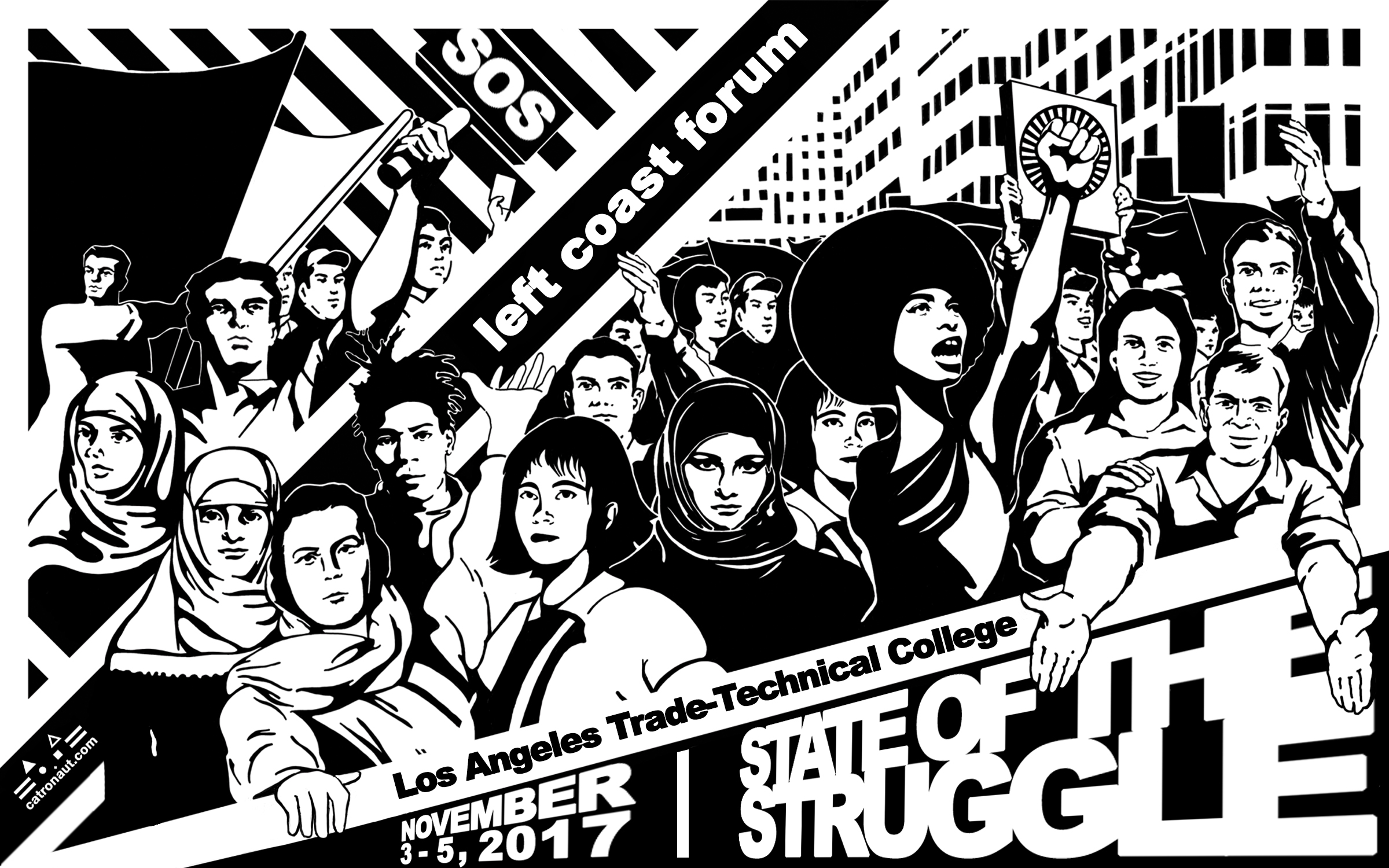 With the grim racist, anti-immigrant, anti-woman, anti-labor ideology that has grasped much of the nation’s political dialog, the time couldn’t be better to introduce a new platform to West Coast activists and organizers eager to combat this unprecedented reactionary takeover.

Modeled on and partnering with New York City’s venerable Left Forum, the inaugural three-day Left Coast Forum will focus on ways the burgeoning populist uprisings—think Occupy, Standing Rock, Black Lives Matter, Fight 4 Fifteen, Dreamers—can mold themselves into a lasting movement to create a racially and economically just world Americans too often honor in our words, but so rarely in our deeds.
This November at Los Angeles Trade Tech, you’ll find speakers, panelists, and fellow activists building upon sometimes disjointed street protests, online petitions, and siloed thinking to create the potent united front needed to reclaim all threatened rights and freedoms.

Keynote Speakers:
Richard D. Wolff
Title of the talk: A Left Program for the US Today
Bio: Professor of Economics Emeritus, University of Massachusetts, Amherst where he taught economics from 1973 to 2008. He is currently a Visiting Professor in the Graduate Program in International Affairs of the New School University, New York City.
Read more at: http://www.rdwolff.com/about

Aimee Allison
Title of the talk: She the People: the Heart of the Progressive Movement
Bio: President of Democracy in Color, an organization that focuses on race, politics and the New American Majority that worked to elect President Barack Obama, Senator Cory Booker, Senator Kamala Harris, and other leaders who carry a social justice agenda. She is host of the “Democracy in Color” podcast. Aimee has launched “Get in Formation”, a national call for Black women to support Stacey Abrams for governor of Georgia. Beginning in September 2007, she was co-host of The Morning Show on Pacifica station KPFA, 94.1 FM in Berkeley, California.
Read more at: http://www.aimeeallison.com/

David Swanson:
Title of the talk: Why End War and How
Bio: David Swanson is an author, activist, journalist, and radio host. He is the director of World Beyond War, a global nonviolent movement to end war and establish a just and sustainable peace. David is campaign coordinator for RootsAction.org. David’s books on war and peace include War Is A Lie (a catalog of the types of falsehoods regularly told about wars), War Is Never Just (a refutation of just war theory), and When the World Outlawed War (an account of the 1920s peace movement and the creation of the Kellogg Briand Pact), as well as (co-author) A Global Security System: An Alternative to War (a vision of a world of nonviolent institutions). David blogs at DavidSwanson.org and WarIsACrime.org. He hosts a weekly radio show called Talk Nation Radio. He speaks frequently on the topic of war and peace, and engages in all kinds of nonviolent activism. He recently drafted a resolution urging Congress to move money from the military to human and environmental needs, rather than the reverse. Versions of the resolution were passed by several cities and by the U.S. Conference of Mayors. David also recently organized, with a lot of help from the Backbone Campaign, a flotilla of 50 kayaks that held banners on the Potomac River in front of the Pentagon reading “No wars for oil / No oil for wars.” David is a 2015, 2016, 2017 Nobel Peace Prize Nominee. David holds a Master’s degree in philosophy from UVA and has long lived and worked in Charlottesville, Virginia.

David Kyuman Kim
Title of the talk: A Love-Driven Politics: Reclaiming the Hope & Heart of Progressivism
Bio: David Kyuman Kim is Professor of Religious Studies and American Studies at Connecticut College, where he served as the College’s Inaugural Director of the Center for the Comparative Study of Race and Ethnicity. Kim is author of Melancholic Freedom: Agency and the Spirit of Politics (Oxford 2007), and co- editor of The Post-Secular in Question (NYU 2012) and of a special issue of The ANNALS of the American Academy of Political and Social Science on race, religion, and late democracy. Kim has served as Senior Advisor to the Social Science Research Council’s Program on Religion and the Public Sphere. He was also Editor-at-Large of The Immanent Frame, the SSRC’s blog on secularism, religion, and the public sphere. In 2009, he was the Inaugural Visiting Professor of the Humanities at the Cogut Center for the Humanities at Brown University. Kim is co-convener of the Love-Driven Politics Collective, and co-founder (with Aimee Allison) of DnA Media, a social justice media company that brings together everyday people––online and across America––into meaningful conversations about democracy, love, and race. DnA is also a core partner of the Empathy Lab, a collaborative project sponsored by Columbia University’s Digital Storytelling Lab and Refinery29. Kim is Co-Producer with the Kindling Group (Chicago) of the documentary project Prophetic Voices, a digital series highlighting secular and religious prophets and progressive organizations across the U.S. His current book project is The Public Life of Love.