New Book: Marx and Social Justice – Ethics and Natural Law in the Critique of Political Economy 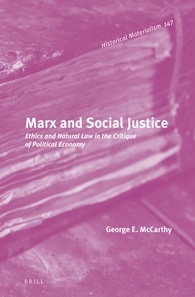 By George E. McCarthy. From Brill:

In Marx and Social Justice, George E. McCarthy presents a detailed and comprehensive overview of the ethical, political, and economic foundations of Marx’s theory of social justice in his early and later writings. What is distinctive about Marx’s theory is that he rejects the views of justice in liberalism and reform socialism based on legal rights and fair distribution by balancing ancient Greek philosophy with nineteenth-century political economy. Relying on Aristotle’s definition of social justice grounded in ethics and politics, virtue and democracy, Marx applies it to a broader range of issues, including workers’ control and creativity, producer associations, human rights and human needs, fairness and reciprocity in exchange, wealth distribution, political emancipation, economic and ecological crises, and economic democracy. Each chapter in the book represents a different aspect of social justice. Unlike Locke and Hegel, Marx is able to integrate natural law and natural rights, as he constructs a classical vision of self-government ‘of the people, by the people’.