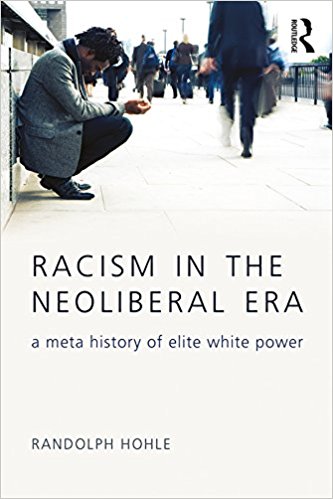 By Randolph Hohle. From Routledge:

Racism in the Neoliberal Era explains how simple racial binaries like black/white are no longer sufficient to explain the persistence of racism, capitalism, and elite white power. The neoliberal era features the largest black middle class in US history and extreme racial marginalization. Hohle focuses on how the origins and expansion of neoliberalism depended on language or semiotic assemblage of white-private and black public. The language of neoliberalism explains how the white racial frame operates like a web of racial meanings that connect social groups with economic policy, geography, and police brutality. When America was racially segregated, elites consented to political pressure to develop and fund white-public institutions. The black civil rights movement eliminated legal barriers that prevented racial integration. In response to black civic inclusion, elite whites used a language of white-private/black-public to deregulate the Voting Rights Act and banking. They privatized neighborhoods, schools, and social welfare, creating markets around poverty. They oversaw the mass incarceration and systemic police brutality against people of color. Citizenship was recast as a privilege instead of a right. Neoliberalism is the result of the latest elite white strategy to maintain political and economic power.