Call for Solidarity Actions for Academics for Peace from Turkey 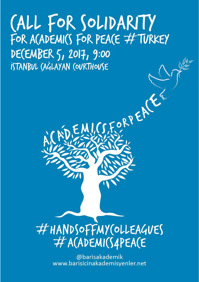 As signatories to the Peace Petition of 11 January 2016, we have experienced continuous repression since we called for peace in Turkey in our declaration titled “We Will Not Be A Party To This Crime.”

Today, as the trials of the signatories of the Academics for Peace Declaration is about to begin, we need your support more than ever. Signatories of the call for peace are accused of “making propaganda for a terrorist organisation”! The charge is punishable with imprisonment of up to 7 years 6 months under Article 7/2 of the Turkish Anti-Terror Law. This is a major threat not only to our colleagues but also to all who care about freedom of expression and academic freedom.

As of November 15, 2017, only one tenth of the Academics for Peace signatories have been summoned.

The first set of trials, with 10 minutes per individual case, will extend from December 2017 to April 2018.

The trials are based on the same ‘copy and paste’ bill of indictment, but on an individual basis. The individual cases will be tried by different Criminal Courts, on different dates and in 10-minute intervals. The aim is to prevent the signatories from standing together and pursuing collective defence strategies against the same charge they all face.

So far, the support we have received from members of universities and the general public in Turkey and beyond has been an invaluable source of hope and strength for us. Your support during this new turn of events is more important and vital than ever. What is on trial in Turkey now is not only the individual academics who signed the Academics for Peace Declaration but the very concept of academic freedom and its defenders all over the world.

We call on you to stand up and stand by us in the courts starting from December 5, 2017. To do this, please send monitoring teams and observers to Turkey, raise awareness of the show trials, and call on Turkish authorities and the authorities in your countries to stop the witch hunt against academics and academic freedom in Turkey.

We will continue to do so with your ever growing solidarity.