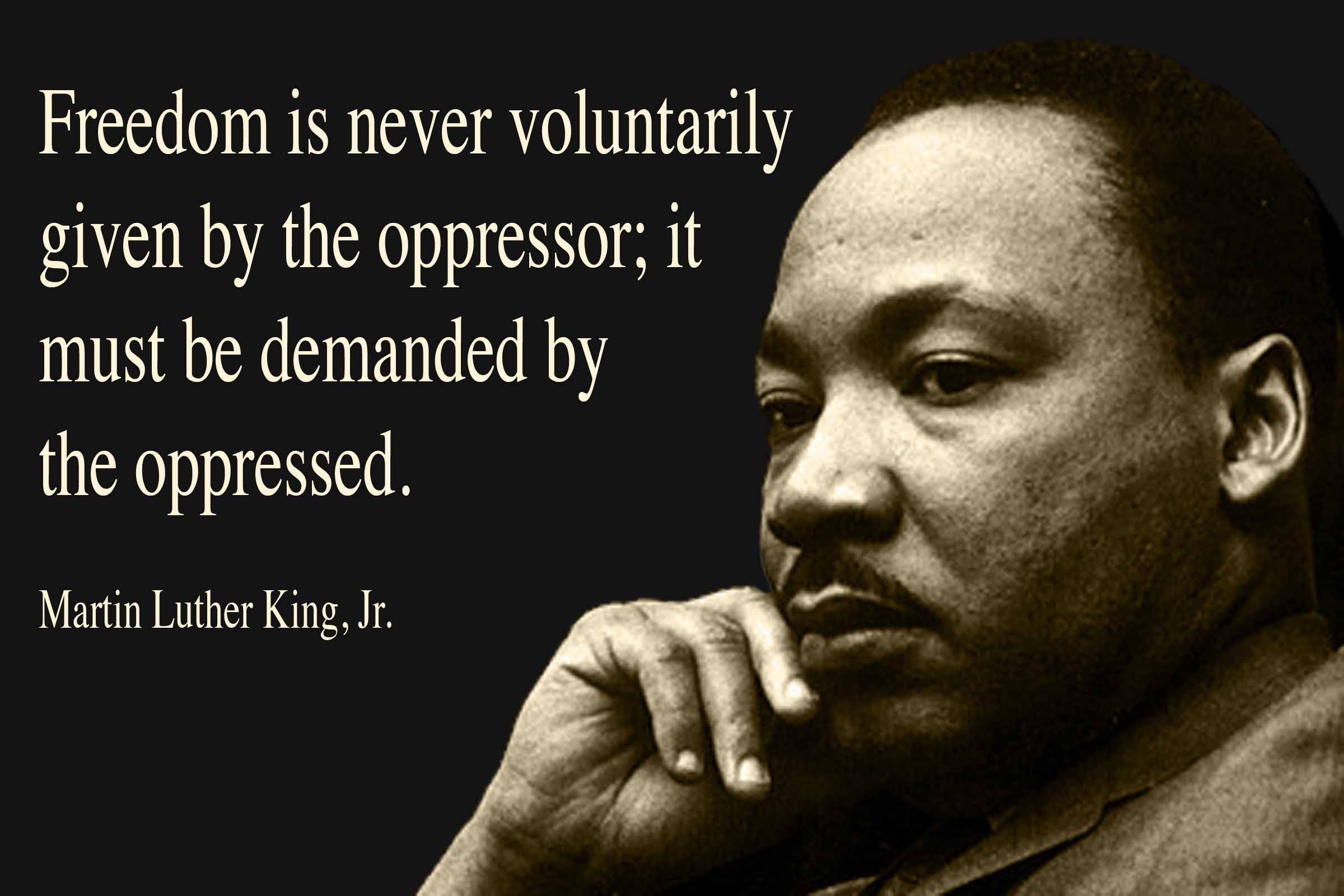 As we celebrate Martin Luther King Jr. weekend, it’s worth remembering that his legacy was based firmly in the labor and the socialist movements of the 20th century. It takes nothing away from King to highlight how his work built on those movements and his voice was magnified by his association with them.

Martin Luther King Jr. was recruited in Montgomery by a labor organizer, gave his most famous speech at a DC rally funded by labor unions, was bailed out of a Birmingham jail with union dues and would die in Memphis fighting for a union.

Most people know at this point that Rosa Parks was not some random woman sitting down on a bus because she was tired, but was a civil rights activist in the Montgomery community who had become chapter secretary of the local NAACP chapter. Less known to many is Edgar Daniel (“E.D.”) Nixon who was a long-time leader of the NAACP chapter and who in fact launched the Montgomery Bus Boycott and recruited the young Martin Luther King Jr. to help lead the campaign.

Nixon was born in 1899 and with little education had become a Pullman car porter and in 1928 joined the Brotherhood of Sleeping Car Porters Union, the first union led by an African American, A. Philip Randolph. Nixon would later organize the Montgomery branch of the union and lead it for many years. From that labor platform, Nixon would build both the local NAACP chapter and then the Montgomery Improvement Association (MIA) which would be the launchpad for Martin Luther King’s career.

Nixon in Montgomery was a microcosm of the role A. Philip Randolph and the Brotherhood would play in supporting the civil rights movement across the nation. Partly because the porters became a bulwark of the black middle class with decent union wages and partly because their ability to travel made them an ideal network for communication among black activists across the country, the Brotherhood were the quiet bulwark of civil rights work, especially during the early years of the 20th century.

A Philip Randolph and the March on Washington

Randolph is probably the most important civil rights leader of the 20th century along with Martin Luther King Jr., yet many people don’t even know his name. Originally a disciple of Eugene Debs in the Socialist Party in the 1910s, Randolph ran the black magazine The Messenger associated with the Party and would run as a Socialist Party candidate for New York State Controller in 1920 and Secretary of State in 1922.

But it was in his role as President of the Brotherhood of Sleeping Car Porters, which he was elected to in 1925, where he would make his mark. The Brotherhood would become the first black-led union to join the American Federation of Labor in 1935 and, through bitter struggles, the union would eventually achieve a contract with the Pullman Company in 1937 that dramatically raised wages and improved work conditions for the thousands of porters at the company.

But Randolph would achieve national fame when he was chosen leader of the National Negro Congress, a coalition of civil rights organizations, and in 1941 threatened to lead a massive march on Washington by black Americans to protest discrimination in defense contractors gearing up for World War II. President Roosevelt agreed to create Fair Employment Practices Committee to stop employment discrimination in wartime industries, a temporary measure that would still be the prototype for the Civil Rights Act of 1964. By threatening to lead black youth in resisting the draft, he would push Harry Truman to finally desegregate the U.S. army in 1948.

Randolph would work closely with King after the Montgomery Bus Boycott and in 1963, he along with his lieutenant Bayard Rustin (a long-time socialist activist himself who would be named chairman of the Socialist Party in 1972), would organize the “March on Washington for Jobs and Freedom,” where Martin Luther King Jr. would deliver his “I Have a Dream” speech.

One of the key funders of the March on Washington, including doing much of the organizing in union locals around the country, would be the United Auto Workers (UAW) union, led by Walter Reuther, the only prominent white speaker at the march. Reuther himself had come out of the Socialist Party in the 1930s when he became a prominent organizer in the UAW, eventually becoming President of the union in 1946. In the post-war period, he would become one of key institutional supporters of the civil rights movement. When Martin Luther King Jr. challenged Bull Connor in Birmingham and protesters, including masses of children, filled the jails, it was Reuther who worked with other labor leaders to provide the large amounts of bail money needed to get them released.

Jerry Wurf and the Memphis Strike

Most people have seen clips of Martin Luther King Jr.’s “I’ve been to the Mountaintop” speech the night before he died in Memphis, but few remember he was there to support a strike of sanitation workers organized by the American Federation of State, County and Municipal Employees (AFSCME). It was a tough struggle of black workers caught in the whirlwind of conflicts between King and the emerging black power movement, but at its heart it was workers standing up and saying, as their picket signs said, “I Am a Man” to a white establishment that sought to deny them basic dignity.

Sparked by the death of two black sanitation workers crushed in their truck, the Memphis strike was the culmination of organizing by Local 1733 of AFSCME which had been struggling for years to gain a union contract with the city of Memphis. And Memphis in turn was a southern beachhead of work by AFSCME across the nation to demand that urban municipal workers be paid a decent wage.

AFSCME was led then by Jerry Wurf, a socialist who would gain leadership of the New York local of AFSCME in the 1950s and the Presidency of the national union in 1964. Long before he became head of AFSCME, Wurf had worked to set up the first chapter in New York of the Congress of Racial Equality (CORE) and would strongly support the Freedom Rides down south from that position. He had supported Martin Luther King Jr. beginning in his time in Montgomery and would continue to be a supporter until MLK’s death. Wurf was arrested himself during the Memphis strike and was released just days before King’s murder. Wurf would remain one of the most prominent radicals in the labor movement’s leadership one of the main union leaders who helped launch the Democratic Socialist Organizing Committee (DSOC) in 1973, the forerunner of today’s Democratic Socialists of America.

The media tends to dwell on Martin Luther King’s “I Have a Dream” speech and ignore most of what he said on economics and inequality. But King was always clear on the connection between strong unions and a strong civil rights movement; he would argue:

Negroes are almost entirely a working people…That is why Negroes support labor’s demands and fight laws which curb labor. That is why the labor-hater and labor-baiter is virtually always a twin-headed creature, spewing anti-Negro epithets from one mouth and anti-labor propaganda from the other mouth.

In his later years, King would become an avowed socialist, saying to aides, “we are saying that something is wrong with capitalism. There must be a better distribution of wealth, and maybe America must move toward a democratic socialism.” When he testified before Congress in 1966, he talked about economic inequality and capitalism driving the hopelessness of the urban black poor. “We can’t end slums in the final analysis without seeing the necessity to take profit out of slums,” he told the Senators that day. His turn to building the Poor People’s Campaign in 1968 was specifically about moving the civil rights movement toward fighting for economic transformation of society- and he had Michael Harrington, who would become the main leader of the Democratic Socialist Organizing Committee, draft the Poor People’s Manifesto that outlined the campaign’s vision.

All along his journey, Martin Luther King Jr. had been supported by the wing of the labor movement rooted in the socialist traditions of the 20th century and he in turn would increasingly speak out in support of that vision, whether opposing profiteering in American ghettos, denouncing the Vietnam War’s role in upholding global inequality or standing with labor unions in demanding justice for workers.

So don’t just celebrate the sanitized “secular saint” version of King promoted by the media but remember his radical vision – and the socialist labor activists that strengthened his work and amplified his voice throughout his career.