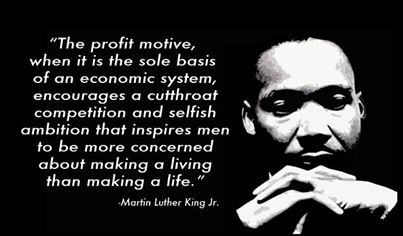 In a posthumously published essay, Martin Luther King, Jr. pointed out that the “black revolution” had gone beyond the “rights of Negroes.” The struggle, he said, is “forcing America to face all of its interrelated flaws—racism, poverty, militarism and materialism. It is exposing the evils that are rooted deeply in the whole structure of our society. It reveals systemic rather than superficial flaws and suggests that radical reconstruction of society itself is the real issue to be faced.”

But it had not started out that way. Over the course of a decade, the black struggle opened up a deeper interrogation of U.S. society, and King’s politics traversed the same course.

Indeed, in the early 1960s, the Southern movement coalesced around the clearly defined demands to end Jim Crow segregation and secure the right of African Americans to unfettered access to the franchise. With clear targets and barometers for progress or failure, a broad social movement was able to uproot these systems of oppression. King was lauded as a tactician as well as someone who could articulate the grievances and aspirations of black Southerners.

But despite the successful example of nonviolent civil disobedience across the South, it appeared to have little, if any, lasting impact on the edifice of racial discrimination that defined black life elsewhere. Indeed, the seeming permanence of black marginalization across the United States produced hundreds of urban uprisings in the middle of the 1960s. If King’s strategic genius in the South was deploying nonviolent civil disobedience to disarm Southern racists while coercing the political establishment into securing first-class citizen rights, it was a strategy that ultimately failed in cities such as Los Angeles, Chicago, Philadelphia, and Washington, D.C. In those places, obnoxious signs of Jim Crow were not the problem; rather, it was the insidious but obscured actions of the real-estate broker, the banker, the employer, the police officer, and other agents that maintained racial inequality.

As King’s attention drifted from the South to the entrenched northern ghettos, he faced denunciations and chastisement from former allies in the North. These people had supported him so long as he confined his demands to ending legal discrimination. Indeed, because Southern racism was rendered as antiquated and regressive, King was celebrated for helping to pull the South toward progress and modernity. But even as the civil rights movement was valorized for its intervention in the South, it was demonized when it brought its call for black power and liberation to the North—a dynamic that continues to the present day.

In King’s time, institutions in the North that preached racial neutrality but that were wholly complicit in racial subjugation appeared impervious to tactics that used confrontation and embarrassment to compel change. King was forced to reconceive his strategy.

King’s confrontation with the Chicago mayor Richard J. Daley, for instance, was instructive. When King went to Chicago in 1966 to participate in an ongoing campaign to end slums in the city’s black West Side, he was confronted by the obstinacy of patronage-fueled machine politics. African American gatekeepers viewed King as an interloper, and the mayor viewed him as a nuisance. Daley simply denied that there was a ghetto in Chicago, and the black political machine exhorted that the ghetto’s existence was proof positive of racial progress. They deprived King of the spectacle of confrontation that had exposed the Southern establishment.

It was this foray into the tough political environment of residential segregation and political machines that provided the momentum for King’s radicalization. His political maturation prompted him to connect the U.S. war in Vietnam to the deteriorating conditions in U.S. cities, and of even more consequence, it prompted him to search for more effective tactics in confronting the legal menace of segregation in the North and the attendant crises: slum conditions, unemployment, and police brutality.

Within this context, King began to publicly articulate an anti-capitalist analysis of the United States that put him in sync with rising critiques from the global revolutionary left of market-based economies. Despite the “affluence” of the United States, it was, nevertheless, wracked by poverty and entrenched in an endless war. King masterfully tore down the wall that the political and economic establishments used to separate domestic policies from foreign policies. He debunked the lie at the core of the Johnson administration that they could deliver both guns and butter, and he pointed out how the Vietnam War made it impossible to satisfy the deep need that existed on the home front. Moreover, any society invested in the evisceration of the Vietnamese people could not truly be a society committed to developing the human potential of its own people.

King’s realization was the need for even greater forces to be recruited into the movement to achieve social transformation within the United States. By the end of his life, King recognized the coercive power of other forms of disobedience. In planning a Poor People’s March in Washington, D.C., he called for extralegal protests not aimed at undoing unjust laws but in the name of political and economic demands that represented the interests of the majority. In Memphis, during the sanitation workers strike in 1968, he called for a general strike to shut down the entire city.

In a story published a week before his assassination, King told Jose Yglesias in the New York Times magazine, “In a sense you could say we are engaged in the class struggle.” The civil rights movement had not cost a dime, he said, but the movement to uproot poverty and inequality throughout the country would “be a long and difficult struggle, for our program calls for a redistribution of economic power.” Even as King recognized the need for a broader, multiracial struggle to successfully engage in a “radical revolution of values,” he still understood the dialectic connecting the black movement to a larger reckoning in the United States.

He was cut down before he could see the fulfillment of his new strategy in Memphis or in Washington, D.C., and the “interrelated flaws” of U.S. society have only intensified in the fifty years since King first invoked them. Indeed, the conditions warranting class struggle have become worse as the wealth within U.S. society has continued to accrue at the top. Yet King’s ability to name the elemental human suffering that is produced by our profit system, while simultaneously demonstrating the centrality of the black movement in unraveling its internal and external logic, remains a powerful political tool. This anniversary offers new opportunities to engage King’s political thought, including his anti-capitalism and his repeated call for larger and deeper political struggle.