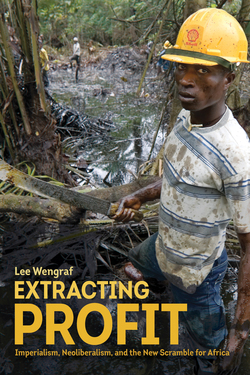 by Lee Wengraf. From Haymarket Books:

A piercing historical explanation of poverty and inequality in African societies today and the social impact of resource-driven growth, Extracting Profit explains why Africa, in the first decade and a half of the twenty-first century, has undergone an economic boom. Rising global prices in oil and minerals have produced a scramble for Africa’s natural resources, led by investment from U.S., European and Chinese companies, and joined by emerging economies from around the globe. African economies have reached new heights, even outpacing rates of growth seen in much of the rest of the world. Examined through the lens of case studies of the oil fields of the Niger River Delta, the Chad-Cameroon Pipeline and the East African infrastructure boom, this period of “Africa rising” did not lead to the creation of jobs, but has instead fueled the extraction of natural resources, profits accruing to global capital, and an increasingly wealthy African ruling class.
Extracting Profit argues that the roots of today’s social and economic conditions lie in the historical legacies of colonialism and the imposition of so-called “reforms” by global financial institutions such as the World Bank and International Monetary Fund. The chokehold of debt and austerity of the late twentieth century paved the way for severe assaults on African working classes through neoliberal privatization and deregulation. And while the scramble for Africa’s resources has heightened the pace of ecological devastation, examples from Somalia and the West African Ebola outbreak reveal a frightening surge of militarization on the part of China and the U.S.
Yet this “new scramble” has not gone unchallenged. With accounts of platinum workers’ struggles in South Africa, Nigerian labor organizing and pro-democracy upheavals in Uganda and Burkina Faso, Extracting Profit offers several narratives of grassroots organizing and protest, pointing to the potential for resistance to global capital and fundamental change, in Africa and beyond.