On 16 May 2018 in one of the committee rooms of the Houses of Parliament, MP Caroline Lucas, leader of the Green Party, and Anneliese Dodds, Shadow Minister for the Treasury, spoke at the launch of the Progressive Economy Forum (PEF), an organization initiated by prominent London human rights lawyer Patrick Allen. On the following day the PEF Council met, made up of leading economists (members shown here), to initiate its project of transforming the economic narrative in Britain. As part of our commitment to policy making, Peter Dowd, Labour’s Shadow Financial Secretary in the Treasury, joined us in the afternoon.

The Progressive Economy Forum will launch a new macroeconomic narrative, founded on the progressive values of equality, dynamism and sustainability. To put it succinctly, PEF seeks to dispel the myths and lies of austerity economics and replace that pernicious ideology with a progressive macroeconomic vision and narrative.

What we on the PEF Council seek to dispel is nothing less than the ideological justification for the destruction of public services and the associated disintegration of our national sense of community. Conservative governments have implemented this destruction and disintegration through expenditure cuts whose long run purpose is the weakening of the public sector, sometimes encapsulated in the term “neoliberal agenda”.

Severe as it has been for the welfare of the British people, the last eight years of austerity under three Conservative governments are but the most recent manifestation of Tory assaults on public services. Since Margaret Thatcher became prime minister almost forty years ago, contracting the public sector has been the recurrent theme across Tory governments.

Far worse than a dip, dip, dip of water torture cuts, Conservative governments have assaulted the public sector with the siege machines of constrained departmental budgets, privatisation and catastrophic reductions in local government grants. This is the sorry history of Tory governments that PEF, through its educational and outreach activities, seek to expose and discredit.

That sorry story appears in Chart 1, total pubic spending as share of GDP over four decades, 1980-2017. I was initially surprised that in the first three years of the Thatcher government the share of public spending in GDP rose. This unexpected rise is the “exception that proves the rule” of Conservative governments, resulting not from expenditure increases, but from austerity-driven contraction of GDP. Then-Chancellor Douglas Howe consciously provoked a severe recession with the putative and punitive purpose of reducing inflation. As the economy haltingly recovered, the public sector declined. The share of public spending fell continuously for the rest of the decade, from 42.8% in 1979 in the last year of the Labour government to less than 35% in 1989 (Thatcher’s last full year in power).

By comparison the years of the Major government were relatively benign for public spending, though it remained continuously below the 38 year average and fell after 1992. The return of a Labour government briefly coincided with further decline, to 35% in 2000 from 37% when the Major government staggered to its unlamented end in a near electoral wide-out. The decline at the end of the 1990s represented the reverse causality of the early 1980s. A four year above-average growth rate of 3.5% resulted in GDP expanding faster than public expenditure. During the last of the Blair years, 2000-2007, the public expenditure share in GDP rose almost continuously, to well above the period average. In 2007 just before the global financial crash public spending relatively to GDP had returned to the four decade average of 39.7%.

In the early 1980s a policy-induced recession pushed up the spending-GDP ratio by driving down GDP. A far more severe and certainly not intended recession arrived in 2008. The collapse in GDP combined with strong countercyclical fiscal policy took public sending to 44% of GDP in 2010. Following the reactionary tradition of Thatcher, the Cameron governments quickly and aggressively reversed that increase. This neo-Thatcherite assault on public spending, faithfully continued by the May government, again brought the spending share below 40%.

Chart 1: Tory austerity, been there before 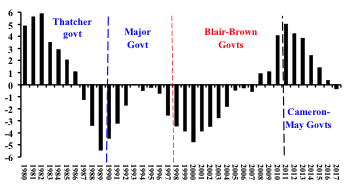 A second chart shows the clear link between squeezing public expenditure and economic growth. During the Thatcher-Major years when the public expenditure share fell drastically and remained consistently for long term trend, the 17 year average GDP growth rate was 2.2% and negative in five of those years.

By contrast during the 10 Blair-Brown years prior to the global crisis the spending ratio rose and GDP growth increased to an average of 3%. The seven full years of Cameron-May brought us back to the Thatcher-Major rates, even lower at 2.0%. Four decades changed neither Tory economic policy nor its outcomes – a contracting public sector and growth rates well below potential.

To quote a famous song by Frank Sinatra, Tory austerity and stagnation “go together like a horse and carriage”, and multiple conservative governments have confirmed “you can’t have one without the other”.

Those of my generation may remember another song, this one a 1960s British (but an adaptation from a 1920s American vaudeville act), “Lilly the Pink”. The song celebrates the virtues of a miracle cure for all conceivable bodily ailments, the “medicinal compound”. However, when taken by hopeful sufferers, the consequences are disastrous – eg, its “cure” for stammering is to leave a person unable to speak.

It would be difficult to find a better metaphor for the austerity ideology that has ravaged country after country. Prime Minister Margaret Thatcher and 21st century Chancellors Osborne and Hammond all promised that it would repair and revive the British economy. As in the song, when urged to “drink-a-drink-a-drink” the austerity compound, the British public (and citizens everywhere) find themselves not cured but suffering from a collapsing health service, economic stagnation, local governments in bankruptcy and social services in tatters.

Building on the gathering public recognition that the austerity ideology as no more than snake oil, the Progressive Economy Forum provides focus for a new, positive economic narrative. Is a narrative of hope not despair, identifying the policies that can take Britain from the current austerity-induced malaise to a vibrant society managed for and by the many not the few.