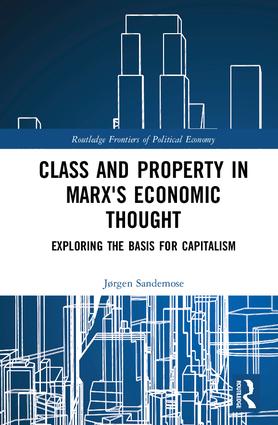 By Jørgen Sandemose. From Routledge:

This book presents the capitalist system as a function of the interaction of the three basic classes in the capitalist social formation. Through this, it shows how the corresponding conflicts and clashes of interests between those classes – industrial capitalists, wage labourers and landed proprietors – are unavoidable for understanding contemporary economic structures.

Analysing these economic structures in relation to the forms of property ownership, as well as the typical processes of production connected with them, the author points out how Karl Marx’s theory of the capitalist social formation is closely connected with the emergence and existence of a national money market. At the same time, the book places a special emphasis on Marx’s theory of ground rent and modern landed property, an aspect misinterpreted by many authors; and through an evaluation of the most important Marxian categories regarding the analysis of the world market and its development, further emphasis is placed on the concept of differences in labour intensity between nations. This evaluation illustrates how the main categories of capital, wage labour and landed property acquire a completely different internal relation in poor countries compared to Western capitalist societies.

Class and Property in Marx’s Economic Thought aims at exposing a method for analysing contemporary capitalism through focusing on the basic relations of population groups in the capitalist social formation. It will be of interest to students and researchers within the field of economics, as well as other social sciences.