LIVES VERSUS DOLLARS FOR BILLIONAIRES 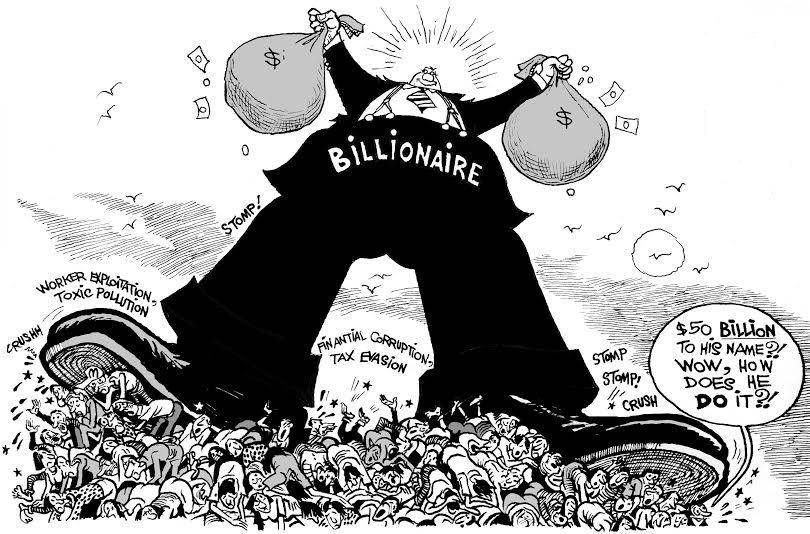 THE FOLLOWING COMMENTARY WAS DELIVERED BY MICHAEL MEEROPOL PROFESSOR EMERITUS OF ECONOMICS AT WESTERN NEW ENGLAND UNIVERSITY OVER WAMC-FM ON MARCH 29, 2020.

So I was watching TV the other night when they showed a clip from the appearance of Dan Patrick the Lieutenant Governor of Texas on the Tucker Carlson show.

He said the following, “No one reached out to me and said as a senior citizen, are you willing to take a chance on your survival in exchange for keeping the America that all America loves for your children and grandchildren. And if that’s the exchange, I’m all in.”

Let’s analyze what this guy is saying.   Let’s start with “keeping the America that all America loves….”   He’s referring of course to our economy — the economy that rewards big corporations and immensely wealthy people while leaving 80-90 percent of the people behind.   This is the economy that even after 10 years of recovery was unable in the year 2017 to get the median income of men above the level it had achieved in 2000.   This is an economy that even after 10 years of recovery had left so much frustration on the part of a significant percentage of the white working class that enough of them who had voted for Obama twice voted for Donald Trump that year.

I am going to translate Patrick’s statement into its hidden meaning.  Hidden behind his assertion that “all America” loves this economy is the belief that saving the lives that are at risk as the Coronavirus washes over the land — spiking at rates that might very well overwhelm the health care systems in many areas of the country — is too expensive in terms of incomes lost.  In other words, keeping Patrick’s buddies in the billionaire class rich is more important than saving the lives of the people at risk.

[For a more blatant example, see “Charles Koch Network Pushed $1 Billion Cut to CDC, Now Attacks Shelter-in-Place Policies for Harming Business” Lee Fang, 3/26/2020 available at https://theintercept.com/2020/03/26/americans-for-prosperity-cdc-coronavirus/   In the article we learn that Americans for Prosperity (a creation of the billionaire Koch brothers) is urging states and localities not to follow the “shelter in place” mandates of some states (like NY and California and Illinois) so as to make sure business keeps operating.   Meanwhile, all employees of Americans for Prosperity are working from home!]

Next let’s examine Patrick’s noble offer to sacrifice his life so his children and grandchildren can enjoy the America he loves.   (Patrick survived personal bankruptcy early in his career but now is a successful politician and owner of two successful Texas radio stations.   Probably he and his family are in the top 10% of the income pyramid so I imagine the economy does work very well for them.)

In economics classes, students learn about spillover costs and benefits.   This concept states (and it’s just common sense really) that things that happen to an individual affect people other than that particular individual.   Thus, getting an education has positive spillover benefits, while being struck by a dangerous communicable disease has negative spillover costs.   The positive spillover from my education (all the way through 5 years or graduate school plus four years writing my Ph D) included all the skilled contributions I made in my 40-plus-year career as a college professor.   Many people other than I benefited from my education.   The negative spillover costs should Patrick actually get the Coronavirus (and even die from it) go way beyond his personal sacrifice.   Because he seems to have absorbed the individualistic part of American culture, he can only think of this situation in terms of HIS sacrifice.

[In psychology and anthropology there are cultures that are primarily individualistic where individuals (or at least the individual family) are considered the most important way to think about one’s responsibilities.  The U.S. has been strongly influenced by this individualistic culture yet there are indeed many people who display empathy and take actions that benefit people other than themselves or their family.

Meanwhile, countries like South Korea display a collective-oriented culture which can in part explain why they responded so positively (and it appears almost uniformly) to the government’s decisions to test everyone and have everyone observe the precautions urged by the public health authorities.   That is perhaps one of the reasons why even though South Korea experienced its first Coronavirus case around the same time the US did, they have tested virtually the entire population while we are still way behind.  And note, South Korea is NOT like China.  It is a democracy with an elected government.]

Let’s examine in more depth Patrick’s noble promise to sacrifice his life to guarantee his children’s and grandchildren’s ability to live the American dream.  If he gets sick with Coronavirus, unless he promises to immediately commit suicide, he will end up in the health care system.  Even before he becomes symptomatic, he will have infected lots of other people — many of whom will not be senior citizens.   (Contrary to the urban legends that led too many young people to cavort in groups over spring break, the disease does not only affect seniors.   Younger people have died — even if at a lower rate than seniors.)  This is the first example of a spillover cost.   The cost to him of getting sick produces costs imposed on all the people he infects.

Once Patrick is symptomatic he ends up taking up space in the health care system — using scarce resources like ventilators, protective gear and an ICU bed.   This is the next round of spillover costs.   Absent an infinite supply of ventilators, etc. every one of these used to keep Patrick alive cannot be used to keep some other person alive.  And — he will divert the attention of health care workers from those who became sick, not because of personal irresponsibility but through no fault of their own.    He will also put the health care workers taking care of him at risk given the insufficient supply of protective gear and definitely taking them away from caring for people who, unlike him, do not wish to SACRIFICE themselves on the altar of billionaire capitalism.

NEXT – let us scale up the noble sacrifice he is willing to make to keep the American economy humming along.   Suppose there are 10,000 oldsters like him willing to make that sacrifice.   Multiply all the spillover costs I just mentioned by 10,000 (Again, assuming these oldsters don’t commit suicide to save the rest of society from these spillover costs) and all those extra challenges I just specified will also be multiplied by 10,000.

Finally, his idea that his noble sacrifice will save the “America that all America loves” (translation:   the American economy that works so well for the top dogs) will be self-defeating.    As all these volunteering oldsters get sick, they will infect so many other people that the economy will really grind to a halt.

Right now, there are essential workers going to work every day.  This does not just include health care workers, first responders, people working in grocery stores and pharmacies.  It includes the many truck drivers who deliver food and medicines.   It also includes people maintaining the electricity grid and local water supplies — including, again, those delivering fuel and important equipment.   Without a steady supply of electricity and fresh water, those of us working from home including the teachers who are attempting to give some level of normalcy to the lives of school age children will suddenly be cut off.   In the parts of the country that are still experiencing cold weather this is particularly dangerous to the health of those behaving responsibly by staying at home.   With thousands of oldsters volunteering to risk their lives for the American economy, the increased infection rate will surely crash the economy MUCH WORSE than we are experiencing how.

[I highly recommend the OP-ED in the New York Times for Thursday, March 26 — “What if We Reopen America Too Early?” by Nicholas Kristof and Stuart Thompson — available on P. A23.  A version of this article is available at https://www.nytimes.com/interactive/2020/03/25/opinion/coronavirus-trump-reopen-america.html.   The main point of the article is that maintaining social distancing for only two weeks predicts approximately 126 million infections whereas maintaining social distancing for two months will hold the infection rate down to 14 million.   With a one percent death rate, even that low number leaves 140, 000 deaths — much much higher than the number we lose in a typical flu season.]

Thus, the idea of sacrificing a few thousand senior citizens (assuming they have the perverse views of the Lieutenant Governor Patrick) to save the economy will be self-defeating.

That man is a moral idiot and an economic illiterate.