#Unis4all: An Open Letter to the U.S. Higher Education Community

For a growing majority of outspoken administrators and faculty, the economic fallout associated with the Covid-19 crisis threatens to catapult U. S. higher education into a draconian age of austerity, layoffs, and closures. The question, according to this emerging consensus, is not if cutbacks are on the horizon, but how many, and who will suffer most.

In truth, however, the collapse of the American university is far from inevitable. As the present health emergency suggests, moreover, it will take more than business-as-usual to remediate its long-standing structural inequalities and injustices, according to an emerging minority of educators, staff, and students.

In our capacity as a 501(c)(3) dedicated to bringing accurate and accessible knowledge of monetary systems to the broader public, we at The Modern Money Network (MMN) wish to express our solidarity with this defiant minority by equipping organizers, activists, and sympathetic administrators with an actionable plan to finance a just transition through and beyond the coronavirus pandemic.

Concretely, we propose that universities circumvent negligent state and federal legislatures and self-finance future expenditures by issuing their own credits called “Unis.” Pronounced you-knees, this coinage plays on the well-known shorthand for municipal debts, or “Munis.”

As detailed in a recent piece, Unis will be issued as “University Payment Anticipation Notes.” Unis will have value as circulating money by virtue of the university’s willingness to accept them in later payments. What is more, the Federal Reserve can assist universities by extending its current purchasing support for Munis to Unis, guaranteeing that Unis, too, always clear at par.

Imagine: As a result of massive revenue losses and projected cuts in state support, Mid-Sized Regional Public University (MSRPU) faces a $150 million shortfall for FY2020-2021. Instead of waiting around for state and federal legislators to take action, and to avoid having to resort to drastic measures like furloughs, hiring freezes, or financial exigency in the meantime, MSRPU announces its plan to issue 150 million (or more) of its own Unis, which it guarantees to accept for all university payments–from tuition and fees to rent across all university-owned real estate and every university cafeteria. Finally, to clinch the Uni’s universal acceptability, MSRPU petitions the Federal Reserve to backstop its credit with full purchasing support for Unis in accordance with its already existing statutory authority. Voila: Financial autonomy and local prosperity in the midst of a global meltdown.

What is a University?

The key to winning the fight for Unis, we argue, is to recognize what a university is in contrast to what decades of ideological conditioning have construed it to be.

Over the past forty years, the university has come to be understood as a revenue-constrained, quasi-market actor, requiring tuition, taxes, bonds, donations and endowments to finance future operations. So embattled, universities have enlisted armies of new administrators and fundraising officials charged with finding the money any way they can, whether by increasing class sizes, raising tuition and fees, courting corporate donors, or even soliciting money from their own workers and students. Cash-strapped public universities, meanwhile, have jockeyed with state politicians for the dubious right to raise tuition rates at their own discretion. Forever coming up short, and perpetually under threat, universities have been reduced in the collective imaginary to brutishly entrepreneurial, penny-pinching enterprises, with workers and students bearing the very worst of the consequences.

In reality, however, universities–and, especially, public universities–are now and have long been immense provisioning authorities in their own rights. Their faults notwithstanding, universities oversee vast physical infrastructures and thousands of employees, while imposing regular, non-reciprocal obligations on far-reaching communities in the forms of tuition, fees, fines, rents, and access to their massive networks of food and supplies. As any discerning Modern Monetary Theorist will tell you, this combination endows universities with a powerful legal capacity: to finance themselves directly by creating dollar-denominated credits prior to receipt of revenue and to do so as needed. The tragedy of neoliberalization, then, is not merely its debasement of higher ed to a ruthless business, but also its lethal erasure of the university’s tremendous fiscal powers.

Credit creation takes many forms but, by necessity, credit must be issued before it can be received in payment. Congressional appropriations, Depression-era local currencies, bank loans, simple promises to pay or IOUs are all experimental and socially constructed variations on this basic, yet woefully misunderstood principle. Unis take advantage of such an understanding of credit by drawing from the strengths of previous models. Who has the power to make successful promises? The answer is any organization with robust institutional infrastructure, capacity to circulate liquidity flows, and strong public trust.

What the Uni reveals, ultimately, is that monetary constraints are neither natural nor neutral. They are products of politics and often poor money design. States, cities, and universities regularly circumvent artificially-imposed revenue requirements through bond issues and other creative measures. However, the current crisis requires new promises and universities are quite prepared to make and deliver on them. Under the Uni scheme, the American university is decidedly not revenue-constrained. Because universities create the Uni, they can never run out.

So long as there are workers to hire and resources to mobilize, universities can more-than-afford to survive and thrive. In fact, as trusted public provisioners, universities are well-poised to lead community-centered, ecologically sensitive investment during the pandemic. Unis secure such urgent promises and the freedom to reimagine higher education beyond the crisis.

Thus in the face of state budget shortfalls, deficit-averse legislators, and a corrupt and incompetent presidency, university organizers and activists would do well to take a page from the Depression-era musical, The Wizard of Oz, in which the Wizard tells a seemingly hopeless Lion, Tinman, and Scarecrow,“Everything you were looking for was right there with you all along.”

Pulling back the curtain

In 2008, the Federal Reserve executed a series of experimental actions aimed at preventing a global economic collapse. The ensuing creation of myriad lending facilities transformed the Fed into an assortment of monetary laboratories unconstrained by conventional wisdom. The results of the Fed’s 2008 liquidity experiments were mixed: no Great Depression, but a highly unequal, jobless recovery. However, what such trials demonstrated conclusively is that the Fed can act swiftly and forcibly in order to save necessary infrastructures.

Today, we find ourselves in far more unusual and exigent circumstances. In response, the Fed has resurrected a series of old facilities as well as an all-important addition: the Municipal Liquidity Facility (MLF). Under current MLF guidelines, states and municipalities can issue eligible notes, or “Munis,” for the Fed to purchase up to 20 percent of their 2017 revenues. Though still largely unknown and underutilized, this guaranteed purchase arrangement stands to not only furnish state and local governments with much needed stability, but also liberate states and municipalities from Washington’s poisonous trickle-down policies.

Now is the time to liberate our universities, too.

Should the Fed resist, institutions of higher ed still can and should proceed to issue Unis anyway. However, since universities are clearly critical institutions, vital to the economic health and well-being of communities and neighborhoods, the Fed would actually fulfill its mandate were it to expand the MLF to purchases of Unis. Just as the Federal Reserve Act’s Sections 13(3) and 14(2)b opened up its balance sheet to banks, insurance companies, and a host of other institutions, these same legal arrangements are designed to free a wide array of educational institutions from fiscal crises. 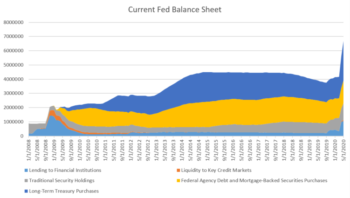 With the full backing of the Fed, American universities can then concentrate completely on the work of teaching, building, and healing our communities. It can also do so patiently and with care, tempering hasty and dangerous calls to return to in-person instruction and on-campus activity by Fall 2020.

A brief survey of state and university budgets (below) indicates that adding both Munis and Unis to the Fed’s balance sheet would not only comprise less than a third of what is currently being held in mortgage backed securities (MBS), but also prove far more generative and stabilizing than this growing mountain of toxic real-estate assets. By comparison, the Uni, unlike an MBS purchase, will induce direct job creation and community involvement. Furthermore, since universities are enormous property owners, Unis will protect countless real-estate and other investments across the United States. As anchor institutions, universities stabilize our states, counties, and cities. Under the Fed’s protection, Unis will reduce systemic risk while promoting widespread economic stability. 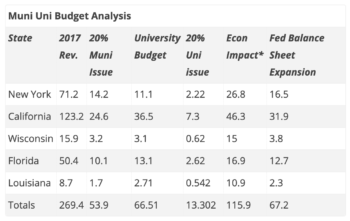 Source: State and University Financial Reports. *Economic impact studies vary widely in model and parameter settings. The selection of 20% is not a policy recommendation, but the current level set by the Federal Reserve for Muni purchases.

The financial elite have kicked down the Fed’s doors. Buying debt of non-financial corporations; giving state and local governments access to lending; assisting small businesses: such unprecedented moves the myth of the Federal Reserve as an independent organization of neutral managers who do not pick winners and losers. Now that these doors are wide open, let us seize the moment to democratize finance for the public good.

Far more than a mere stop-gap measure constrained by the terms of coronavirus budget crises, Unis politicize the malignant structure of the neoliberal university. They reveal long-concealed capacities for public money creation, and in doing so, call into question the reified structures of precarity that have conditioned our institutions for decades. As a consequence, Unis turn pre-Covid higher-ed struggles for political and economic justice toward open and contestable futures.

Specifically, the Uni can serve as a rallying call for intersectional organizing, drawing a host of heterogeneous needs and demands into a holistic political project. Through the unifying Uni, we can address our immediate health and safety concerns, while simultaneously working toward structural reform. The Uni, for example, can enable us to:

By placing the Uni at the center of these and other variegated struggles, we can shatter zero-sum politics that undermine intersectional solidarity and expose administrative frugality as a cruel and unnecessary sham. At the same time, solidarity between institutions is crucial. When higher ed systems, universities, and colleges band together, they strengthen their collective bargaining position and bolster the Uni’s powers of provisioning.

If issuing Unis seems like an impossible, even miraculous, answer to Covid-19, it is only because life under the neoliberal university has “trained [us] to feel this about our own needs and visions,” according to Christopher Newfield. Serendipitously, then, it is fitting that, in addition to phonetically echoing “Munis,” Unis also conjure the magic of unicorns, pointing beyond the naturalized limits of needless austerity. Still, if Unis can deliver us somewhere over the rainbow, then it is principally because they promise to unleash the fantastic powers universities have harbored all along. 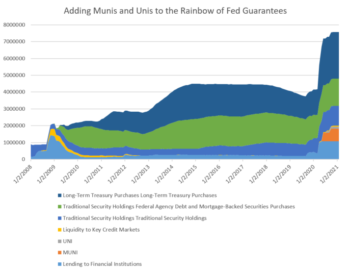 Source: Federal Reserve Bank of Cleveland in millions of dollars. Future Fed balances hold current spending constant while adding the current 20% revenue constraints values for Munis and the proposed Unis. This is not a policy recommendation but a demonstration for scale.