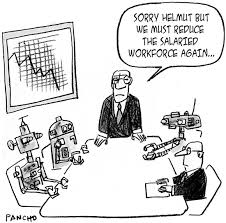 In the wake of Donald Trump’s alarming election to the White House, historian James Livingston published an essay in Aeon Magazine with the somewhat provocative title, “Fuck Work.” The piece encapsulates the argument spelled out in Livingston’s latest book, No More Work: Why Full Employment is a Bad Idea (The University of North Carolina Press, 2016).

In both his book and the Aeon essay, Livingston sets out to address several overlapping crises: an alienating and now exhausted “work ethic” that crystallized during the Protestant Reformation; forty years of rampant underemployment, declining wages, and widening inequality; a corresponding surge in financial speculation and drop in productive investment and aggregate demand; and a post-2008 climate of cultural resentment and political polarization, which has fueled populist uprisings from Left to Right.

What the present catastrophe shows, according to Livingston’s diagnosis, is the ultimate failure of the marketplace to provision and distribute social labor. What’s worse, the future of work looks dismal. Citing the works of Silicon Valley cyber-utopians and orthodox economists at Oxford and M.I.T., Livingston insists that algorithms and robotization will reduce the workforce by half within twenty years and that this is unstoppable, like some perverse natural process. “The measurable trends of the past half-century, and the plausible projections for the next half-century, are just too empirically grounded to dismiss as dismal science or ideological hokum,” he concludes. “They look like the data on climate change—you can deny them if you like, but you’ll sound like a moron when you do.”

Livingston’s response to this “empirical,” “measurable,” and apparently undeniable doomsday scenario is to embrace the collapse of working life without regret. “Fuck work” is Livingston’s slogan for moving beyond the demise of work, transforming a negative condition into a positive sublation of collective life.

In concrete terms, this means implementing progressive taxation to capture corporate earnings, and then redistributing this money through a “Universal Basic Income,” what in his book is described as a “minimum annual income for every citizen.” Such a massive redistribution of funds would sever the historical relationship between work and wages, in Livingston’s view, freeing un- and underemployed persons to pursue various personal and communal ends. Such a transformation is imminently affordable, since there are plenty of corporate funds to seize and redirect to those in need. The deeper problem, as Livingston sees it, is a moral one. We must rebuff the punishing asceticism of the Protestant work ethic and, instead, reorganize the soul on more free and capacious bases.
Lest we get the wrong idea, Livingston maintains that social labor will not simply disappear in a world organized by a tax-funded Universal Basic Income. Rather, he envisions an increasingly automated future, where leisure is our primary preoccupation, social labor becomes entirely voluntary, and ongoing consumption props up aggregate demand. Eschewing utopian plans or prescriptions, he wonders,

What would society and civilisation be like if we didn’t have to ‘earn’ a living—if leisure was not our choice but our lot? Would we hang out at the local Starbucks, laptops open? Or volunteer to teach children in less-developed places, such as Mississippi? Or smoke weed and watch reality TV all day?

Enraged over the explosion of underpaid and precarious service work? Disaffected by soulless administration and info management positions? Indignant about the history of unfree labor that underwrites the history of the so-called “free market”? Want more free time? Not enough work to go around? Well, then, fuck work, declares Livingston. Say goodbye to the old liberal-democratic goal of full employment and bid good riddance to misery, servitude, and precarity.

“Fuck work” has struck a chord with a diverse crowd of readers. Since its release, the essay has garnered more than 350,000 clicks on the Aeon website. The Spanish publication Contexto y Acción has released a translation of the piece. And weeks later, Livingston’s rallying cry continues to resonate through social media networks. “Fuck Work” has been enthusiastically retweeted by everyone from Marxists and small “l” liberals to anarchists and tech gurus.

The trouble is that Livingston’s “Fuck Work” falls prey to an impoverished and, in a sense, classically Liberal social ontology, which reifies the neoliberal order it aims to transform. Disavowing modern humanity’s reliance on broadscale political governance and robust public infrastructures, this Liberal ontology predicates social life on immediate and seemingly “free” associations, while its critical preoccupation with tyranny and coercion eschews the charge of political interdependence and caretaking. Like so many Universal Basic Income supporters on the contemporary Left, Livingston doubles down on this contracted relationality. Far from a means to transcend neoliberal governance, Livingston’s triumphant negation of work only compounds neoliberalism’s two-faced retreat from collective governance and concomitant depoliticization of social production and distribution.

In a previous contribution to Arcade, I critiqued the Liberal conception of money upon which Marxists such as Livingston unquestionably rely. According to this conception, money is a private, finite and alienable quantum of value, which must be wrested from private coffers before it can be made to serve the public purpose. By contrast, Modern Monetary Theory contends that money is a boundless and fundamentally inalienable public utility. That utility is grounded in political governance. And government can always afford to support meaningful social production, regardless of its ability to capture taxes from the rich. The result: employment is always and everywhere a political decision, not merely a function of private enterprise, boom and bust cycles, and automation. There is therefore nothing inevitable about underemployment and the misery it induces. In no sense are we destined for a “jobless future.”

Thus upon encountering Aeon Magazine’s tagline for Livingston’s piece—“What if jobs are not the solution, but the problem?”—I immediately began wondering otherwise.

What if we rebuffed the white patriarchal jargon of full employment, which keeps millions of poor, women, and minorities underemployed and imprisoned? What if, in lieu of this liberal-democratic ruse, we made an all-inclusive and well-funded federal Job Guarantee the basis for a renewed leftist imaginary?

What if we stopped believing that capitalists and automation are responsible for determining how and when we labor together? What if we quit imagining that so-called “leisure” spontaneously organizes itself like the laissez-faire markets we elsewhere decry?

What if we created a public works system, which set a just and truly livable wage floor for the entire economy? What if we made it impossible for reprehensible employers like Walmart to exploit the underprivileged, while multiplying everyone’s bargaining powers? What if we used such a system to decrease the average work day, to demand that everyone has healthcare, and to increase the quality of social participation across public and private sectors? What if economic life was no longer grounded solely in the profit motive?

What if we cared for all of our children, sick, and growing elderly population? What if we halved teacher-student ratios across all grade levels? What if we built affordable homes for everyone? What if there was a community garden on every block? What if we made our cities energy efficient? What if we expanded public libraries? What if we socialized and remunerated historically unpaid care work? What if public art centers became standard features of neighborhoods? What if we paid young people to document the lives of retirees?

What if we guaranteed that Black lives really matter? What if, in addition to dismantling the prison industrial complex, we created a rich and welcoming world where everyone, citizen or not, has the right to participation and care?

What if private industry’s rejection of workers freed the public to organize social labor on capacious, diverse, and openly contested premises?

What if public works affirmed inclusion, collaboration, and difference? What if we acknowledged that the passions of working life are irreducible to a largely mythical Protestant work ethic? What if questioning the meaning and value of work become part of working life itself?

What if we predicated social critique on terms that are not defined by the neoliberal ideology that we wish to circumvent?

What if we radically affirmed our dependence on the public institutions that support us? What if we forced government to take responsibility for the system it already conditions?

What if we admitted that there are no limits to how we can care for one another and that, as a political community, we can always afford it?