New Book: Fictitious Capital – How Finance Is Appropriating Our Future 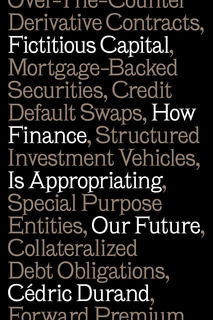 by Cédric Durand, translated by David Broder. From Verso:

The 2007–08 credit crisis and the long recession that followed brutally exposed the economic and social costs of financialization. Understanding what lay behind these events, the rise of “fictitious capital” and its opaque logic, is crucial to grasping the social and political conditions under which we live. Yet, for most people, the operations of the financial system remain shrouded in mystery.

In this lucid and compelling book, economist Cédric Durand offers a concise and critical introduction to the world of finance, unveiling the truth behind the credit crunch. Fictitious Capital moves beyond moralizing tales about greedy bankers, short-sighted experts and compromised regulators to look at the big picture. Using comparative data covering the last four decades, Durand examines the relationship between trends such as the rise in private and public debt and the proliferation of financial products; norms such as our habitual assumptions about the production of value and financial stability; and the relationship of all this to political power.

Fictitious Capital offers a stark warning about the direction that the international economy is taking. Durand argues that the accelerated expansion of financial operations is a sign of the declining power of the economies of the Global North. The City, Wall Street and other centres of the power of money, he suggests, may already be caked with the frosts of winter.